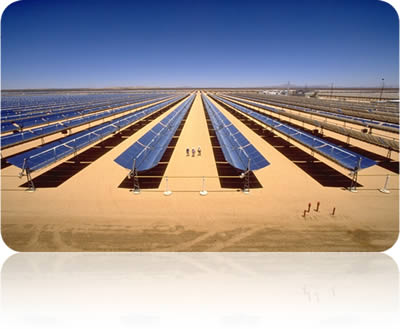 Due to the growing demand for renewable energy sources, the manufacturing of solar cells and photovoltaic arrays has advanced considerably in recent years.

As of 2010, solar photo-voltaics generate electricity in more than 100 countries worldwide and, is the fastest growing power-generation technology in the world.

Installations may be ground-mounted (and sometimes integrated with farming and grazing)[6] or built into the roof or walls of a building, known as Building Integrated Photovoltaics or BIPV for short.

Motivated by advances in technology and increases in manufacturing scale and sophistication, the cost of photo-voltaics has declined steadily since the first cells were manufactured.

The photovoltaic effect is the creation of a voltage (or an electric current) in a material upon exposure to light.

Though the photovoltaic effect is directly related to the photoelectric effect, the two processes are different and should be distinguished. In the photoelectric effect, electrons are ejected from a material's surface upon exposure to radiation of sufficient energy. The photovoltaic effect is different in that the generated electrons are transferred between different bands (i.e. from the valence to conduction bands) within the material, resulting in the buildup of a voltage between two electrodes.

In most photovoltaic applications the radiation is sunlight and for this reason the devices are known as solar cells. The photovoltaic effect was first observed by Alexandre-Edmond Becquerel in 1839.

Photo-voltaics are best known as a method for generating electric power by using solar cells to convert energy from the sun into electricity. The photovoltaic effect refers to photons of light knocking electrons into a higher state of energy to create electricity. The term photovoltaic denotes the unbiased operating mode of a photodiode in which current through the device is entirely due to the transduced light energy. Virtually all photovoltaic devices are some type of photodiode.

Solar cells produce direct current electricity from sun light, which can be used to power equipment or to recharge a battery. The first practical application of photovoltaics was to power orbiting satellites and other spacecraft, but today the majority of photovoltaic modules are used for grid connected power generation. In this case an inverter is required to convert the DC to AC.

When more power is required than a single cell can deliver, cells are electrically connected together to form photovoltaic modules, or solar panels. For a house or a power plant the modules must be arranged in multiples as arrays. Although the selling price of modules is still too high to compete with grid electricity in most places, significant financial incentives in Japan and then Germany, Italy, Greece and France triggered a huge growth in demand, followed quickly by production.

A significant market has emerged in off-grid locations for solar-power-charged storage-battery based solutions. These often provide the only electricity available.

Photovoltaic production has been increasing by an average of more than 20 percent each year since 2002,
making it the world’s fastest-growing energy technology.

By the end of 2010, the cumulative global PV installations surpassed 21,000 megawatts.

In 2006 investors began offering free solar panel installation in return for a 25 year contract, or Power Purchase Agreement, to purchase electricity at a fixed price, normally set at or below current electric rates. It is expected that by 2011 over 90% of commercial photovoltaics installed in the United States will be installed using a power purchase agreement.

The current market leader in solar panel efficiency (measured by energy conversion ratio) is Sun-Power, a San Jose based company. Sun-Power's cells have a conversion ratio of 24.2%, well above the market average of 12–18%. However, advances past this efficiency mark are being pursued in academia and R&D labs with efficiencies of 42% achieved at the University of Delaware in conjunction with DuPont by means of concentration of light.

Photovoltaic arrays are often associated with buildings - either integrated into them, mounted on them or mounted nearby on the ground.

Photovoltaics are costly to install. While the modules are often guaranteed for 20 years, much of the investment in a home-mounted system may be lost if the home-owner moves and the buyer puts less value on the system than the seller.
Solar electricity is seen to be expensive, however, with the UK Feed-In Tariff for green solar energy, Solar PV has been made more accessible to homeowners. Under the scheme, homeowners can generate both free electricity, and a fee per kWh sold to the grid
Solar electricity is not produced at night and is much reduced in cloudy conditions. Therefore, a storage or complementary power system is required. Solar electricity production depends on the limited power density of the location. Average daily output of a flat plate collector at optimum latitude tilt in the UK is 2–4 kilowatt·h/m² , and on average slightly higher in Southern Europe.

MCS has been developed to provide consumers with an assurance that microgeneration products and installation companies meet a robust set of standards. The MCS is also linked to financial incentives such as Feed in Tariffs.

The UK is committed to delivering its share of the EU target for 20% of energy from renewable sources by 2020. Achieving those targets could provide £100 billion worth of investment opportunities and up to half a million jobs in the renewable energy sector by 2020.

How does the MCS affect Manufacturers and Suppliers?

The MCS is an internationally recognised quality assurance scheme which demonstrates the quality and reliability of approved products by satisfying rigorous and tested standards. It was designed with input from product and installer representatives.

Product certification involves type testing of products and an assessment of the manufacturing processes, materials, procedures and staff training.

For more information go to : www.microgenerationcertification.org

For the awarding of a City & Guilds certificate candidates must successfully complete both assessments.