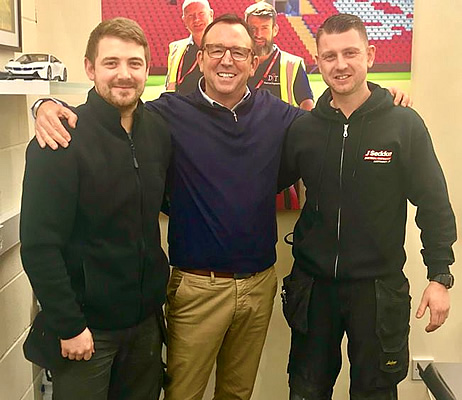 DJT Training began in 2001 as a platform to deliver the Wiring Regulations Training at Liverpool Marina. This training and the Marina became synonymous with electrical training in Liverpool, North Wales and across the Wirral for practicing electricians, and expanded over the next 15 years to the point where DJT set down its roots at the Argyle Training Centre in Birkenhead in 2014. The Wirral DJT Centre gained independent City & Guilds Approval in 2014 & DJT quickly took ownership of the premises next door, expanded and adding EVC & Design Training to its portfolio.

David does not teach at any FE Colleges now, but firmly continues his links within Further Education maintaining strong connections with both the City & Guilds & NAPIT. Since 2014 David spends the majority of the time in the Private Sector overseeing and delivering training for local companies in Liverpool, Manchester the Wirral & North Wales.

DJT runs programmed courses at their Argyle Centre where David remains active, and he maintains his role as MD for DJT Consultancy Ltd, involved with Insurance, Inspection, Testing and Design work for numerous clients and customers. This joint practice ensures a full understanding and awareness of the ever-changing facets surrounding electrical design, technology, electrical legislation & up to date training techniques.

David teaches from Level 2 to Level 4, with DJT being one of the only providers of the City & Guilds 2396 Level 4 Design Qualification in the North West. He takes new electrical City & Guilds examinations as they are released to add to his own portfolio of Engineering Qualifications and to ensure his own training remains valid and current.

DJT also has a customer base abroad where David deals directly with the clients determining their training needs & building bespoke courses for their personnel which are delivered by the DJT team. These clients include Astad Project Management in Qatar, Flemming Gulf in Saudi Arabia, Dubai and Kuala Lumper and Sherriff Electrical in Gibraltar. The middle East and the UAE have become places DJT know well, and have been delivering training there since 2013.

David has stated that he will always remain fully active within the day-to-day activities of both the DJT companies. He is determined for DJT to remain manageable, focused and bespoke and does not wish to compete with the goliath training providers across the UK. There have been numerous opportunities to expand, franchise and partner with larger organisations, but David feels this can ‘water-down’ the learning experience or the ‘personal-touch’ when completing training and/or Consultancy work for their clients.

David summed the approach up in saying:

‘Our model has worked for so long, evolving year on year and constantly being reviewed and perfected, that its hard to think of doing it any other way. The key is a solid, consistent approach to learning & design backed up by a strong team. DJT are lucky to have seen many of our clients & the companies who use us grow in the time since we began, and as we have always been there for them the repeat business builds up a rapport and an understanding that all parties respect. Put simply, people know what they are getting when they come to us. They know who they are going to deal with and they know we are approachable, open, grounded and above all, professional. In our business stability is hard to come by, but as we have been in the field for over 20 years people know where they stand with us, and we will ensure this never changes… ’